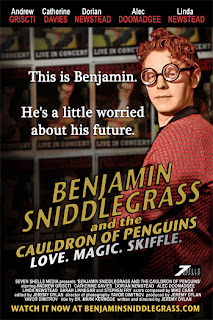 Well, it turns out you can't trust nobody. I thought I knew my producer, Jeremy Dylan, but he was just a conniving control freak. As soon as my back was turned, the arsehole took my movie off me, cut 25 minutes off it, and decided to release it for free on the internet. What a prick.

Here's an example of the two of us having a reasonable discussion on set:

The Producer's Cut of Benjamin Sniddlegrass and the Cauldron of Penguins will hit YouTube on Friday, September 2nd, to co-incide with Dr. Mayo and Dr. Kermode returning to Wittertainment. Check back here or our Facebook page for the link. 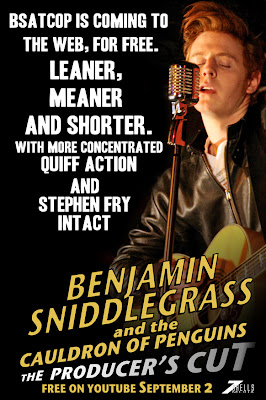 Posted by Jeremy Dylan at 3:41 AM No comments:

BEHIND THE CAULDRON: The Making of Benjamin Sniddlegrass and the Cauldron of Penguins

How did a deranged 20 year old music video director from Australia and his rag tag group of space monkeys make a feature film for $10,000 and rope Stephen Fry into the proceedings? Like this!

Want to own a piece of BSATCOP?

To help fund my next film, I'm selling the blond Epiphone J-200 Acoustic Guitar used in BSATCOP. It's the guitar actually played on the soundtrack as well as being used on screen by Jon Sewell as Johnny Leroy and Andrew Griscti as Benjamin Sniddlegrass.

It's in fine nick, lovely to play and comes with a brand new hard-case I just bought and didn't intend to part with this quickly. Happy to ship to any corner of the globe (cost of this is, of course, your responsibility) and will entertain all offers within the bounds of taste and reason.

Johnny Leroy and the Impulsives - Famous (Music Video) from Jeremy Dylan on Vimeo.

Yet another of those pesky bonus features we could squeeze onto the SPECIAL EDITION DVD of BSATCOP, which by the by you can buy here.


Posted by Jeremy Dylan at 6:44 PM No comments:

We had so much behind-the-scenes footage, it just wouldn't fit on the damn DVD. So in leiu of a Blu-Ray release, we're going to dole out some Bonus Bonus Features exclusively online.

First off, a look at some of the styling of Benjamin Sniddlegrass and the Cauldron of Penguins:

Posted by Jeremy Dylan at 3:23 PM No comments:

BSATCOP came, was seen by and conquered Tasmania!

Posted by Jeremy Dylan at 6:31 AM No comments: